This week I set out to buy a scale. My requirements were simple: I wanted a home scale accurate to within .25 pounds that had Bluetooth or a USB port so that I could transmit data to my computer. It didn’t turn out to be so easy. Here is a brief report about my quest. If anybody has suggestions, let me know and I’ll include them in a future post.
The idea of a scale that can easily transmit weight data to a computer for analysis is so obvious that it must already exist, right? Well, sort of. The idea certainly exists. Over the past few years many press releases have been issued noting the appearance of USB and/or Bluetooth enabled scales. Sometimes the press release is all there is. 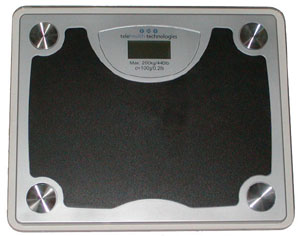 For instance: here (above) is a phantom scale that exists only as a picture. It is supposed to have both an RS232 output and optional Bluetooth. I have searched pretty thoroughly and also emailed the company. So far, no sign of this scale. 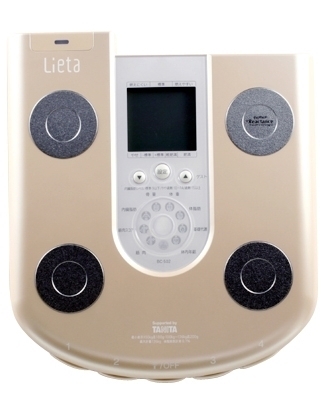 Last year there was a little burst of Web attention for a Tanita scale (above) with a bluetooth module that could send your weight to a mobile phone and from there to a Web site. Akihabara News mentioned that Tanita had several bluetooth scales, and Gizmodo
said that this scale had a USB port and well as bluetooth. But they were nowhere to be found; even searching the Japanese Tanita site doesn’t turn up this model, as far as I can tell, though more recent models may also have these features.
Unfortunately, the most up-to-date Japanese scales aren’t available to purchase from where I live:

So aren’t there any scales available in the United States with a data output feature? Searching for all Tanita scales turned up this “Bluetooth scale” for $210 from a web store aimed at athletes called The Competitive Edge. How does the data output work? I found the manual at the Tanita site and looked up the Bluetooth instructions. With this handy spec sheet (below), you can write your own widget to take the data off your scale and import into your spreadsheet. 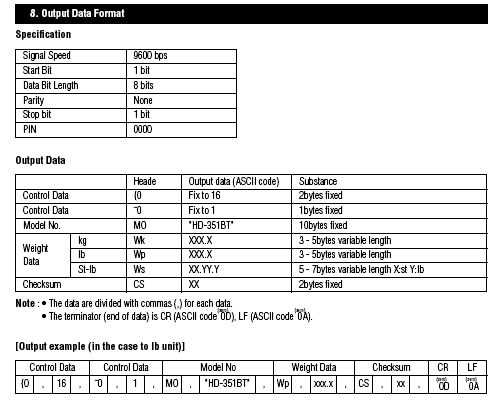 This may be the answer; at least the data is exported as comma-separated values. But first I took a look at another Bluetooth scale I found from A&D Weighing in Milpitus, which manufactures scales of all shapes and sizes. This one is substantially more expensive. Various health tech sites list it for between $360 and $390.
I located the manual to this scale, but unlike the manual for the Tanita scale there is no information here about how the data is output. It says only:

“At the end of the measurement, your weight will be sent automatically to your health monitoring device. You do not need to do anything.”

Could this be right? Certainly there must be some instructions, at least information about how the data will be formatted. A note at Convergent Tech explains:

“Product is not supplied with software or interface to make it “consumer friendly”. Product is intended for Vertical Integrators with the technical skill set to integrate device into their particular applications.”

In other words, with this as with the Tanita scale, we are not supposed to be messing around with our own data analysis, but simply stepping on it at the clinic or office, or perhaps buying it from a health services provider who will also give us the charts and other tools we need.
Okay – if that’s how it has to be, I’m willing to play along. I have no need to satisfy my instinct for writing widgets; in fact, I possess no such instinct. All I’m looking for is a handy way to upload weight data and then export it to a spreadsheet. I don’t want another health plan or insurance policy or enrollment in a high risk patient monitoring program. Isn’t there a company that has written a widget, fired up the web site, and is offering convenient access and a data export feature at a reasonable price?
There is. A firm in Redmond, Washington has gotten there first. Microsoft Health Vault has drivers for both the Tanita and the A&D scales.
That’s pretty terrific. Health Vault is a free service that allows users to store all their medical data, and Microsoft has been working to integrate Health Vault with medical records system in large health plans. But you can sign up for an individual account, and use various applications to upload data either manually, or automatically from certain supported devices, including both the Bluetooth scales.
Finally, I’d found it. I’m a Mac user, myself, but I also have Windows Vista loaded, which I run using Bootcamp. So, here was the answer. To automatically upload and track my weight data, I just need to restart my Mac in Windows mode, sign on to Health Vault, fire up the Health Vault Connection Center, step on the scale, wait for device pairing, and–.

Well, this is the solution I came back to in the end. Write down weight in notebook. Enter weights in Excel when I get around to it.The hard way turns out to be the easy way. The picture here of my blood pressure records. For weight, I’ll just add another column. (Of course, there are also supposed to be bluetooth enabled blood pressure monitors…)

This week I set out to buy a scale. My requirements were simple: I wanted a home scale accurate to within .25 pounds that had Bluetooth or a USB port so that I could transmit data to my computer. It didn’t turn out to be so easy. Here is a brief report about my quest....