Exercise for the Brain 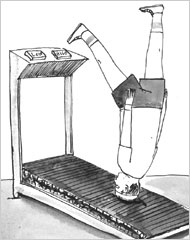 ](http://www.nytimes.com/2007/11/08/opinion/08aamodt.html?em&ex=1194670800&en=87671c1cea6447e9&ei=5087%0A)Brain training games are fun for every fan of self-optimization. We don’t like to play them, we like to point out how unconvincing the evidence is that they really help your brain. Today in the New York Times, two neuroscientists take aim at brain training. They guess that the effectiveness of puzzles and mazes in improving the mental function of laboratory animals may have something to do with the impoverished environment of the lab. “Animal enrichment research may be telling us something important not about the positive effects of stimulation, but about reversing the negative effects of deprivation.”

Sandra Aamodt, the editor in chief of Nature Neuroscience, and Sam Wang, a professor of molecular biology at Princeton, do discuss one type of exercise proven to improve cognitive performance: physical exercise. Aamodt and Wang run down some of the reasons physical exercise is recommended for people concerned to improve (or maintain) their intelligence: exercise is associated with reduced risk of dementia, and a slowing of age-related shrinkage in the frontal cortex; in rodents, exercise has been shown to increase capillary formation in the brain, and exercise is thought to stimulate the growth of neurons in the hippocampus.

But the best general source on exercise and the brain is this review article for the Journal of Applied Physiology, published last year. In it, Arthur F. Kramer,  Kirk I. Erickson, and  Stanley J. Colcombe review both human and animal studies. They begin their review with this paragraph:

MUCH AS BEEN WRITTEN OVER the ages about the benefits of exercise and physical activity. For example, Marcus Tullius Cicero stated, in 65 BC, that “It is exercise alone that supports the spirits, and keeps the mind in vigor” (41). Somewhat more recently, in the mid-1760s, John Adams, the second president of the United States, suggested that “Exercise invigorates, and enlivens all the faculties of body and of mind . . . It spreads a gladness and satisfaction over our minds and qualifies us for every sort of business, and every sort of pleasure” (14). Clearly, however, not all opinions from politicians, philosophers, writers and others concerning exercise and physical activity have been positive. For example, Mark Twain, a literary giant of the 19th century, expressed his disdain for exercise in the statement “I take my only exercise acting as Pallbearer at the funerals of my friends who exercise regularly” (36). Similarly, Henry Ford, the early 20th century industrialist and automotive designer, stated that “Exercise is bunk. If you are healthy, you don’t need it.”

The authors look at the whole scope of available research. They conclude that Cicero and John Adams were right; Mark Twain and Henry Ford were wrong.

In summary, the research reviewed in this paper highlights the positive effects that exercise has on the aging brain in clinical populations, nonpathological populations, and nonhuman animals. Although more intervention research is needed to further address questions related to the benefits of exercise, it appears to be the case that the benefits of physical exercise or physical activities promotes brain and cognitive vitality well into older adulthood.

If you want to explore the chain of research cited, here is a handy citation map.