On September 10, 2008, twenty-eight people interested in collecting all kinds of data about themselves held the first QS Show&Tell in Pacifica, California. Even before the meeting started, it attracted some good-natured ridicule in the Washington Post. People tracking their most mundane activities? Why? It’s a reasonable question. One of the most interesting things I discovered at the QS Show&Tell is that even people who had wonderful graphs built from self-tracking data were wondering how to put this data to use.
Last night’s meeting began with Kevin Kelly asking us to say our name and five words that contained some information about ourselves. The words give a good sense of who was there. Here is a partial list:

People told me about tracking sleep, work, diet, location, weight, hormone levels, sex, attention, and many other things. I am going to be writing some accounts of these projects in the next few weeks. But for now I want to come back to why. The very first person to present, last night raised this question. He had a beautiful graph of his work, sleep, and other activity, based on data he had been tracking for three years. And he was at the meeting to get ideas about how to extract more meaning out of it.
Over the course of the night, I think he got some answers. The general consensus was that personal data has value as a basis for self-experiments. Aggregating this data can support new types of research. Sometimes the mere act of collecting the data helps lead to a better life through increased awareness. It can also be beautiful – a type of art. And at the end of the night Seth Roberts gave a brief account of how he uses his self-tracking data as a source of new ideas.
Still, I think if we’re to be honest, most of us will admit that the utility of self-tracking in achieving some specified goal doesn’t fully explain its fascination. There’s a compulsion, a curiosity, that seems to operate in advance of any particular use. This made me think about the early days of the personal computing revolution, when hobbyists bought themselves an Altair 8800 out of pure enthusiasm and then sat there asking themselves, “now what?” I’m glad they weren’t embarrassed to tinker. They enjoyed their curiosity, and used it to discover many new things.
The very first issue of Byte, published in September, 1975, tried to explain what the new, amateur-sized digital machines were good for. Note the large headline at the bottom of the cover. I take this is a very good reason. 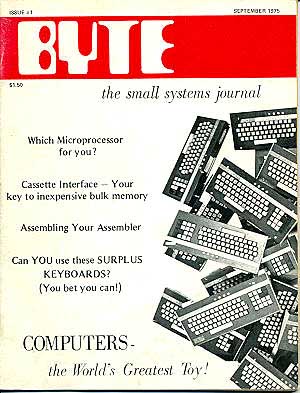 On September 10, 2008, twenty-eight people interested in collecting all kinds of data about themselves held the first QS Show&Tell in Pacifica, California. Even before the meeting started, it attracted some good-natured ridicule in the Washington Post. People tracking their most mundane activities? Why? It’s a reasonable question. One of the most interesting things I...