Last Tuesday 23andMe, the genome sequencing service, hosted the first meeting between its customers. Like Navigenics and deCode, 23andMe will sequence half a million “snips” from your own DNA to give you glimpse of your personal genetics. What you get for your $1,000 payment is lots of numbers and strings of letters, and a little bit of information of how these correspond to health studies and ancestry research. So far this is a very nerdy hobby, requiring a love of data and great patience with crude tools, bugs, and beta everything.

The idea behind gathering early enthusiasts face to face was to increase the exchange of information, methods, motivations in a way that Web 2.0 can’t do. There are ethical issues, social uncertainty, incredible technical complexity, and rapid advancement in this field; having a person in front of you who might know more than you is a great way to learn. 23andMe cleverly calls this initiative to harness customer-generated value 23andWe. 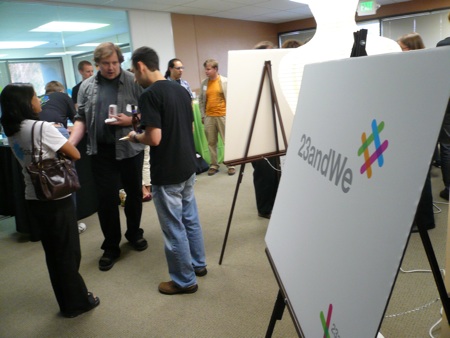 As a paying customer I attended this informal gen-con. I think of this event as the first Personal Genome User Group. We gathered at 23andMe world headquarters in Mountain View, CA, but I think we were outnumbered by the ever helpful staff on hand to answer questions. I was extremely curious about the other customers’ experience, and what they have learned by sequencing their DNA. I don’t want to speak for them, but here is what I have learned by messing around in personal quantified genomics in the last six months:

1) There is far less known about proven genetic diseases that I thought. The list of illness with established origins in genetic mutations is very short, and even then the genetic factors operate statistically. The presence of a particular gene will raise or lower the percentage risk for a health issue, at the most. So one thing I learned from having my DNA sequenced is that very few diseases have a single point genetic basis, which means that gene sequences will be just one factor in a very complex brew of influences.  Personal genetic knowledge is sort of like knowing your blood type: Important to know but far from sufficient.

2) Sequencing is not just about health (and one of the reasons it should not be hijacked by the doctor squad). Your DNA can reveal much about your deep genetic past. Combined with research around the world into ethnic locations and migrations, your sequence can map out the movements of your distant ancestors in pre-history. I was surprised by how interested I became in these movements, both on my maternal as well as paternal side.  I had zero interest in genealogy, and could not care less about my great-great-grandparents and their cousins. But I did find myself surprised by the ethnic pathways of my ancestors, because the identity I normally cling to is obviously (duh!) just the most recent one in a very long line. Naming myself after only one data point and ignoring all the others seems arbitrary. Many of other users at this meeting also expressed to me this pleasant surprise of discovering their interest in their deep ancestry via their sequences.

3) 23andWe is the perfect turn of phrase for another thing I learned.  I have been surprised at how fast and how eager users have been to share their  genetic data. We’ve been conditioned by anxious media reports to believe that people want to hoard their very personal genetic profile, in fear of what would happen if governments, corporations, insurance companies and the neighbors were to see it. But in fact like a lot of other things that have made it online, genetic information only increases in value when shared. Experts thought only a fringe minority would dare share their genes, but swapping genetic info will mostly likely be the norm for a generation that shares everything else. Sharing your genetic info with family members, relatives, and even apparent strangers (who must be related somehow) is exciting, and certainly educational.

Gary Wolf and I have discussed starting a Bay Area Quantified Self User Group with a similar mission: to mutually assist those folks interested in inventing and mastering the tools of self-knowledge, including genetic sequencing. Write me if you are interested.

Last Tuesday 23andMe, the genome sequencing service, hosted the first meeting between its customers. Like Navigenics and deCode, 23andMe will sequence half a million “snips” from your own DNA to give you glimpse of your personal genetics. What you get for your $1,000 payment is lots of numbers and strings of letters, and a little...