Lately I’ve been obsessed with a hard problem that seems easy. You do things that generate data. You have a machine that measures something and produces a number. Sometimes the machine even stores the numbers, so you can look at old measurements. Maybe, if the company is very advanced, the machine will bounce the numbers to your computer and from there into the cloud. You can see them on a Web site!

But in every one of these cases, even the best ones, you are locked into a narrow set of possible uses for your data; and, worse, you have to get involved with a different procedure every time. Even though all the data comes in the form of numbers, each of these numbers (weight, hours worked, cups of coffee consumed, places visited, etc. etc.) is special, and requires its own custom system to track.

Combining them must be hard, or else it would have been done already. Recently, I talked with Rajiv Mehta, who has been trying to create a general purpose method for easy self-tracking. Mehta’s company, Zume Life, is focused on health, but there are so many different things to measure that the quest to create a general health tracker is a good proxy for the quest for an “anything” tracker.

“The hard part is not the device,” Mehta said. “What’s hard is to make it trivial for every user. There are all these ways to get your biometric information – bluetooth, USB – but a lot of people bought their scale twenty years ago and they are not going to get another one.” The problem of getting non-techies linked into a biometric system sounds like a different problem than the one I’ve been thinking about, but in fact it’s similar. Sure, if you have a taste for gadgets you might be willing to drop $300 on a Bluetooth scale, but biometric data includes dozens of potential measures. Most of us don’t have the money to do this all with gadgets, nor do we have the patience. A general purpose self-tracker should be exactly that: general. It should be able to take the output of any device and put it into a standard, shareable form. Is this even possible?

Rajiv’s solution is so simple it is funny.  Zume Life makes a device called the Zuri. Right now the Zuri, which is out in a very small beta, tracks five different type of data: medication, biometrics (weight, glucose, etc.), food, exercise, and health status (pain, coughing, sleep, and so on). People can make up their own questions; their reports are put into a standard form and made available as raw data, or as charts and graphs. 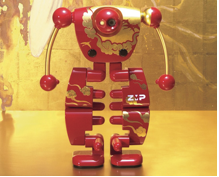 How is the possible? Easy: you just talk into it. The audio file is then converted into a standard form and entered into the system by human beings. It doesn’t matter whether you say “my blood pressure is 130 over 80,” or “systolic 130, diastolic 80.” It doesn’t matter whether you track sleep or coughing. In most cases, a human can figure out what you meant. The Zuri is still distant from public release. Rajiv predicts spring or summer of 2009. The interesting thing to me is how his solution – in its elegant triviality – demonstrates how much general intelligence is required for general self-tracking.