Hey, What Happened to My Brain?

For a few months, I’ve been measuring how well my brain is working
using arithmetic problems. Each test session includes 100 simple
problems (3+4, 7-0, 4*8) divided into 5 blocks of 20. I type the last
digit of the answer as quickly as possible. I got the idea from Tim Lundeen, who got better on a similar task when he increased his DHA intake. My performance on an earlier version of this task was improved by flaxseed oil.

I’ve blogged about this. The virtues of this test include: 1. Fast. Takes only a few minutes. 2. Portable. Requires only a laptop. 3. Many possible answers (1, 2, 3, etc.). This reduces anticipation errors. 4. Many numbers (reaction times) per test.
This allows me to get a measure of variability for each session and can
correct for the difficulty of the problem. Aspects with room for
improvement include: 1. Speed/accuracy tradeoff. Accuracy isn’t fixed.
Depending on how accurate I want to be, I’ll go faster or slower. (I
aim for 95% correct.) 2. No complex actions. The most enjoyable games
have a motor-skill aspect that this task does
not.

Here’s the data so far. 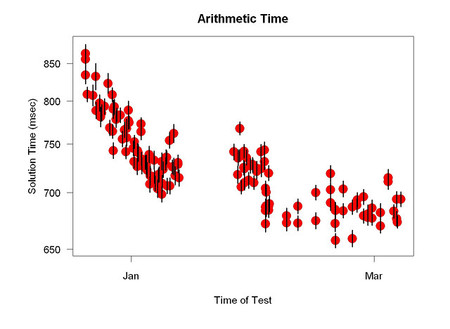 The big gap happened because I moved from Beijing to Berkeley. The most
fascinating result, of course, is the sudden drop on February 2. Here
is a close-up. 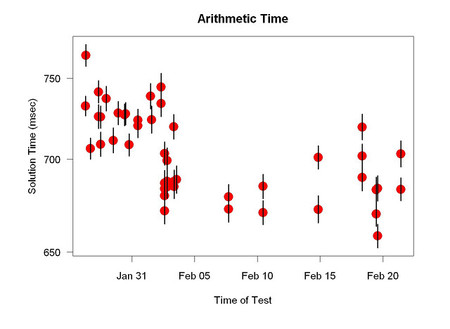 The drop was easy to notice. All of a sudden I was faster (and only
slightly less accurate). How sharp the change: On February 2 at 8 am I took the test; my
scores were roughly the same as they had been the past month. At 2 pm
the same day, I took the test again and was about 50 msec faster. (In
reaction-time experiments, a surprising 50-msec effect is huge.) I
remained faster for at least several weeks.

What might have caused this? The first test with better performance took
place while my landlady, who lives upstairs, was practicing piano.
Usually it’s quiet when I test myself. My first thought was that the
music had caused the improvement. But it persisted so long after the
music had stopped that the music couldn’t be the cause.

I moved to Beijing in October. Eventually I ran out of the Spectrum Organic flaxseed oil I’d brought with me and started drinking a Beijing brand called Joyful Organic.
When I returned to Berkeley I brought a few bottles of it with me and
continued to drink it. In late January I ran out; the evening of
January 29 I started drinking Spectrum Organic again. Four days later
my arithmetic scores sharply improved.

It’s really plausible that the improvement was due to the change in
flaxseed oils. Flaxseed oil had made a difference (versus nothing) with a very similar task.
A few weeks before the shift, a friend had asked how I knew if my
Chinese flaxseed oil was good; I’d said I’d find out when I switched
back to Spectrum Organic.

But why was the improvement delayed four days? I started studying
flaxseed oil because one evening I took several capsules and the next
morning noticed my balance was better. And if the improvement is going
to take that long, why would it happen so sharply after the delay? I
can’t even begin to answer these questions.