I’ve been researching how to quantify the level of exotic, synthetic chemicals which all our bodies pick up while living in a manufactured world. All modern citizens carry around traces of chemicals we are exposed to and were not born with. A few years ago, this internal pollution was given the name Human Body Burden. It is quantified by measuring up to 700 different synthetic chemicals or heavy metals than have been found in human blood, including the blood of infants in the US. The scientists engaged in the research call it Human Bio Monitoring (HBM).

Currently the costs of a doing a full-spectrum assay for an individual is on the order of $10,000, so very few individuals have been surveyed. Because of small numbers, the actual significance of the results are still uncertain — but no one is happy that any of them are present. 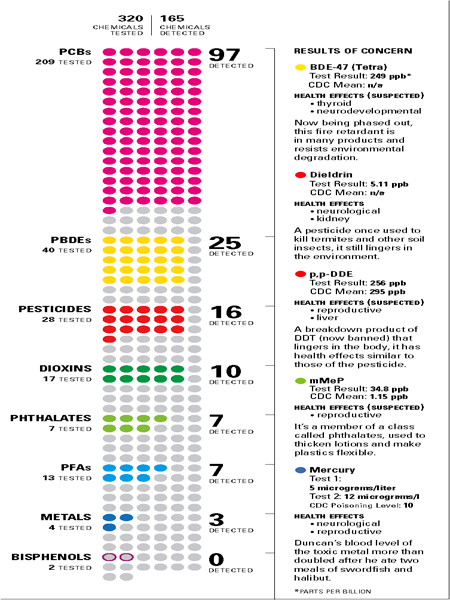 David Ewing Duncan is a Bay area-based journalist who has been quantifying his body by getting his gene’s sequenced and blood tested. (His results shown above.)

Duncan wrote about his body burden in a recent issue of National Geographic, and his report is a fair document of what kinds of things this monitoring will produce. He also goes through his life to offer some suggestions of how exposure to these chemicals might have occurred. He has an entertaining time trying to track down where in his past he may have picked up high levels of obscure industrial chemicals. Duncan has turned this self-examination into a forth-coming book (fall 2008) called The Experimental Man: A Molecular Autobiography. His powerpoint presentation on this experiment so far can be downloaded here.