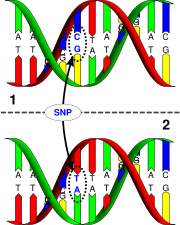 Kevin [posted earlier](http://www.kk.org/quantifiedself/2007/11/access-to-personal-genomics.php) on self-knowledge through consumer genetics and linked to Amy Harmon’s [story](http://www.nytimes.com/2007/11/17/us/17dna.html?ex=1353042000&en=4e47cebf58fa5d93&ei=5088&partner=rssnyt&emc=rss) in the New York Times. I spent the weekend catching up on the very successful wave of publicity orchestrated by [23andMe](https://www.23andme.com/ourservice/labs/), with major stories by Harmon in the Times, Thomas Goetz in [Wired](http://www.wired.com/medtech/genetics/magazine/15-12/ff_genomics), David Ewing Duncan in this month’s [Portfolio ](http://www.portfolio.com/news-markets/national-news/portfolio/2007/10/15/23andMe-Web-Site), Kara Swisher at the [allthingsd.com ](http://kara.allthingsd.com/20071119/kara-visits-23andme/)site, and onward and outward through the Web.
The stories are interesting. As Kevin says: *Personal DNA sequencing is here*. I want my genome, too.
Still, within all of these stories I caught the first hint of a backlash. This backlash has little to do with the main objection all of these writers presented, which was: do I really want to have this important knowledge about my genes? I don’t think this objection is serious. I don’t even get a sense the writers seriously entertain it. I suspect it is a rhetorical effect, an exaggerated worry that lends interest to the promise at hand. ([Gray goo](http://en.wikipedia.org/wiki/Grey_goo) serves this function for nanotech.) Perhaps it is the nerd in me, but I have difficulty imagining that accurate medical self-knowledge would be rejected by consumers because they are afraid to know.
Anyway, there’s a bigger problem. The companies offering these tests carefully insist that they are not be taken diagnostically, and acknowledge that that are not currently accurate indicators of clinical risks. They give these caveats, while of course also trying to satisfy our desire to get accurate clues to our genetic predispositions to scary diseases.
Here’s how Kara Swisher walks 23andMe co-founder Anne Wojcicki through this dance during their (http://kara.allthingsd.com/20071119/23andmes-anne-wojcicki-and-linda-avey-speak-part-1/). In this portion of their conversation, Wojcicki has been talking about the possibility that a 23andMe customer might discover from the study of their genome that they do not easily metabolize caffeine. Swisher asks Wojcicki to explain why this information is useful. Does it tell you not to drink so much coffee?
> Wojcicki: 23andMe service is definitely not, you should not be taking action from the information.
>
> Swisher: Right, you’re no doctors…
>
> Wojcicki: We’re not doctors..
>
> Swisher: Consult your own physician
>
> Wojcicki (grinning): Yes you should consult your own physician. That said, our goal, not necessarily now, but in the future, that this information will be actionable…
But of course the reporters who get a chance to use the 23andMe service, including Goetz and Harmon, develop a fascination with the predictive power of their results, as would anybody with a normal level of curiosity and fear. They repeat the caveats, but then disregard them.
Here’s Harmon at the New York Times:
> My risk of breast cancer was no higher than average, as was my chance of developing Alzheimer’s. I was 23 percent less likely to get Type 2 diabetes than most people. And my chance of being paralyzed by multiple sclerosis, almost nil…I was in remarkably good genetic health, and I hadn’t even been to the gym in months!
Here’s Goetz at Wired:
> Variations of three SNPs double my risk for prostate cancer, leaving me with a 30 percent chance of developing it in my lifetime… And my risk for exfoliating glaucoma, a type of eye disease, is a whopping three times the average American’s. While the average person has just a 4 percent risk, my risk factor of 12 percent means it’s something to mind.
Here’s David Ewing Duncan in Portfolio, describing another personal genome company, Navigenics:
> Navigenics is positioned to go after the millions of Americans who are spending money outside of the traditional health-care system to stay healthy, buying vitamins and dietary supplements, gym memberships, and diet and self-help books.
Just as the dietary supplements sold in row after row of shelves at the pharmacy are “[not for the treatment of any disease](http://www.purehealthsystems.com/cetyl-myristoleate.html),” and state lotteries are “[for entertainment purposes only](http://www.calottery.com/Games/SuperLottoPlus/WinningNumbers/WinningnumberSearch.htm),” so the results given to customers by 23andMe are **not** supposed to be clinical predictions.
So here is the voice of the future backlash, the voice of the angry doctor whose patients are looking to these tests to guide their medical decisions. This self-described MD with the silly pseudonym published the following comment on the Wall Street Journal health blog, in response to a [story](http://blogs.wsj.com/health/2007/11/16/decode-me-personal-dna-sleuthing-on-a-q-tip/) by Ron Winslow about another personal genome company, [deCode Genetics](http://www.decode.com/News/2007_11_16.php):
> I watched the video that accompanies their announcement. Please people, this is (to quote the CEO on their video) “NOT genetic testing!” And “Do not use this to make medical decisions!” What this is “empowerment” and “networking” and a way to suck $1000 from gullible consumers. I hope some liability lawyers out there save that video and replay in in court as the CEO explains how, exactly, this is not genetic testing.
> I.P. Nightly, MD – November 18, 2007 at 8:13 pm
PS: Interesting, even harsher criticism of personal genomics companies comes from the [Gene Sherpa](http://thegenesherpa.blogspot.com/), who claims these companies are using their customers as [non-consenting research subjects](http://thegenesherpa.blogspot.com/2007/11/from-wired-magazine-quote-from-anne.html). I say “interestingly” not because the Gene Sherpa’s tone weirdly resembles that of Dr. I.P. Nightly, but because the aspect of 23andMe that most bothers the Gene Sherpa is exactly the part that I like best: the collection of a large database of SNPs from an active community of users creates new research opportunities that might benefit everybody, even those who never delve particularly deeply into their genome and don’t expect it to guide their health decisions in the immediate future. The personal genome is part of the extension of medical research into more naturalistic settings. It offers a new context for [population studies](http://www.cancer.gov/Templates/db_alpha.aspx?print=1&cdrid=561718). It’s clear that the founders of 23andMe recognize this possibility, and have thought deeply about it. This promise getting lost in the excitement – false for the moment – of being able to accurately predict the risk of a single individual dying in some specific and horrifying way. This larger, more complex effect of the advance in personal genomics is harder to narrate, but it may be the one that changes our life.

Kevin [posted earlier](http://www.kk.org/quantifiedself/2007/11/access-to-personal-genomics.php) on self-knowledge through consumer genetics and linked to Amy Harmon’s [story](http://www.nytimes.com/2007/11/17/us/17dna.html?ex=1353042000&en=4e47cebf58fa5d93&ei=5088&partner=rssnyt&emc=rss) in the New York Times. I spent the weekend catching up on the very successful wave of publicity orchestrated by [23andMe](https://www.23andme.com/ourservice/labs/), with major stories by Harmon in the Times, Thomas Goetz in [Wired](http://www.wired.com/medtech/genetics/magazine/15-12/ff_genomics), David Ewing Duncan in this month’s [Portfolio ](http://www.portfolio.com/news-markets/national-news/portfolio/2007/10/15/23andMe-Web-Site),...

Kevin [posted earlier](http://www.kk.org/quantifiedself/2007/11/access-to-personal-genomics.php) on self-knowledge through consumer genetics and linked to Amy Harmon’s [story](http://www.nytimes.com/2007/11/17/us/17dna.html?ex=1353042000&en=4e47cebf58fa5d93&ei=5088&partner=rssnyt&emc=rss) in the New York Times. I spent the weekend catching up on the very successful wave of publicity orchestrated by [23andMe](https://www.23andme.com/ourservice/labs/), with major stories by Harmon in the Times, Thomas Goetz in [Wired](http://www.wired.com/medtech/genetics/magazine/15-12/ff_genomics), David Ewing Duncan in this month’s [Portfolio ](http://www.portfolio.com/news-markets/national-news/portfolio/2007/10/15/23andMe-Web-Site),...