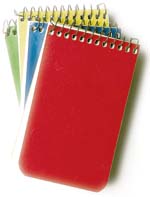 Politicians have always been self-trackers. In the flow of political action, you need a notebook just to keep track of people’s names. But when a recent political controversy was resolved by the notebooks of the most conscientious self-tracker in the history of the United States Senate, the reputation of people interested in personal data got an unexpected boost.

To understand this story, you have to remember how strange it seems to many people that anybody would want to keep a record of the seemingly mundane details of their existence. What could such a document possibly be for?  Here at QS we like to talk about new possibilities for science, self-experiment, art, medicine, and self-knowledge. But whenever I get a call from a newspaper reporter (see here and here), I am reminded how strange self-tracking seems to those who don’t do it.

Enter Bob Graham, ex-Governor and ex-Senator from Florida. Graham has been keeping careful handwritten records of his daily life since 1977, when he first ran for governor. He tracks a lot of things: weight, diet, what he wears, his location (down to the room), and of course the names of the people he meets with, his questions and their answers, his promises and theirs.

Good idea, right? Well, it was considered such an inexplicable eccentricity that some in the press actually speculated it made Al Gore think twice about offering him the vice-presidential nomination in the 2000 U.S. election season, and three years later, when the next round of presidential campaigning got underway, Adam Nagourney of The New York Times wrote:

“The penchant of Senator Bob Graham to keep detailed notebooks
chronicling the most mundane of chores — think: got up, got out of
bed, dragged a comb across my head — may give Democrats pause.”

Well, there was a noisy politically controversy recently over whether culpability for torturing suspects arrested after the terror attacks of 9-11 should be shared by Nancy Pelosi, the Speaker of the House of Representatives. The CIA claimed that Pelosi had been briefed in detail about the torture, and didn’t make any objection until long afterward. Therefore, if there is to be any kind of sanction for torture, it should hit the top Democrat who approved it as well as members of the Republican administration who ordered it. Pelosi, though, denies having been briefed about the torture.

Well, it turns out that Bob Graham was also supposed to have been briefed on these topics, and the CIA forwarded to him the dates of the meetings he supposedly attended. But the CIA records were inaccurate, according to his own personal records. Such was the respect for Graham’s notebooks, that this line of attack was closed within 48 hours.

This is interesting for several reasons. First, it’s worth noting that one man’s spiral bound notebooks were able to accumulate enough credibility to defeat the records of an organization whose very reason for existence is to collect information, communicate it to trusted members of government, and keep records of these communications. Anybody who has been following some of the controversy about patient records can add this strange example to their list of favorite anecdotes. Personal data, kept by a dedicated and interested party, even using yesterday’s technology, will trump large scale collection systems managed by bureaucrats.

But the cultural resonance is also important. Watch the video below, in which talking-head Rachel Maddow explains the controversy. Notice how condescending she is about Graham’s disciplined collection of personal data. But by the end, she is forced to admire the triumph of good individual records over bad institutional ones. “Nerds, 1; Spies, 0” she proclaims.

Finally, a technical note. I was interested to see that in one of the interviews with Graham he specifically justifies keeping track of his location down the room, which is one of the “quirky” details that people like to mention. He says, plausibly, that recording his location at this level of specificity is a memory aid, allowing the topic of a conversation which may only be briefly mentioned in the notebook to flow back into his mind. This is a good idea! Life-loggers, start your notebooks.

From the St. Petersburg Times, some data about Bob Graham’s notebooks:

From NPR, an excerpt from the story about the impact of Graham’s notebooks:

Graham is known as a meticulous note-taker and has maintained a
daily log that fills hundreds of spiral notebooks, which now reside at
the University of Florida Library of Florida History. “Several
weeks ago, when this issue started to bubble up, I called the CIA and
asked for the dates in which I had been briefed,” Graham tells Robert
Siegel. “They gave me four: two in April of ’02, two in September.”

Graham says he consulted his logs “and determined that on three of the four dates there was no briefing held.” He
adds: “On one date, Sept. 27, ’02, there was a briefing held and,
according to my notes, it was on the topic of detainee interrogation.”

Graham says the CIA was initially reticent when he told the agency what he had found in his notes. “They
said, ‘We will check and call back,'” Graham recalled. “When they
finally did a few days later, they indicated that I was correct. Their
information was in error. There was no briefing on the first three of
four dates.”

Graham says the agency offered no explanation regarding how it came up with the other dates.

Politicians have always been self-trackers. In the flow of political action, you need a notebook just to keep track of people’s names. But when a recent political controversy was resolved by the notebooks of the most conscientious self-tracker in the history of the United States Senate, the reputation of people interested in personal data got...