This guest post comes to us from QS Los Angeles member, Mark Krynsky.

I went to the Los Angeles Quantified Self Meetup meeting on March 7th and had a fantastic time meeting like-minded people that are all willing to experiment and share their experiences. The meetup was held at the artisanal engineering studios of the Two Bit Circus located in the eclectic Brewery Art Colony. This made for a really great venue. 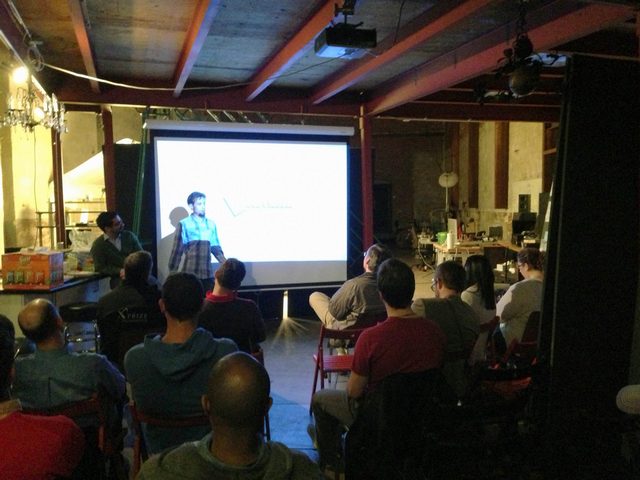 The first speaker was Brent Bushnell who is the Circus ring leader. He walked us through a project his team worked on for the Extreme Makeover Home Edition where they built a relaxation chair for a veteran that suffered from PTSD. They used sensors to track his biometrics to help identify when he may be susceptible to trauma. When certain thresholds were met based on his heart rate the soldier would sit in the chair which would then play soothing sounds and had an aroma therapy device.

The next speaker was Jeff Fajans who gave us a crash course in Positive Psychology which focuses on optimal functioning and well-being by studying people at their best. He showed us his personal experiment in self-tracking character strengths. He described what these strengths are in the context of positive psychology and shared two methods for identifying them. The first method was by using the Gallup Strengthsfinder which is a book that also has an online survey component for $9.99. The other was a system called Values in Action which has an online survey component that is free. Jeff explained that you would want to identify your character strengths so that you could get a better understanding of how you operate and then optimize to enhance mood, energy and predict activities that were either positive or negative for you.

He used an Android mobile app called Paco which was setup to ping him 6 times a day to fill out a short survey that captured the activity he was currently doing, who he may be with, what his mood and energy level was, what strengths he was currently using, and other items. He then showed the results and insights he gained after using Paco which included when he felt energized, creative, in a positive mood, as well as negative aspects such as low energy and mood. Jeff’s presentation was extremely interesting and I look forward to learning more about positive psychology, taking a self assessment survey and using Paco to track my strengths. You can also get much more detail by viewing Jeff’s presentation here.

Amanda Tasse, a PhD candidate at USC, followed and she focused her talk on the design, UI/UX and data visualizations around QS. She covered several interesting ways that environment data can provide interesting visualizations. One example was to create a visualization around the temperature and CO2 levels making students aware of the everyday life of a building. Another example she showed was of a Bio/Emotion map. A San Francisco Emotion Map was an art project by Christian Nold that took 98 participants exploring San Francisco’s Mission District using a Bio Mapping device he invented. These people used the devices to go for a walk and it would record their physiological response to their surroundings. The results were then presented on a map using colored dots and the participant’s personal annotations. The end result is an emotional portrait of the neighborhood that allowed people to share and interpret their own bio data. She also discussed the data visualizations of tools such as TicTrac, Rescuetime, and others. You can see her full presentation here. 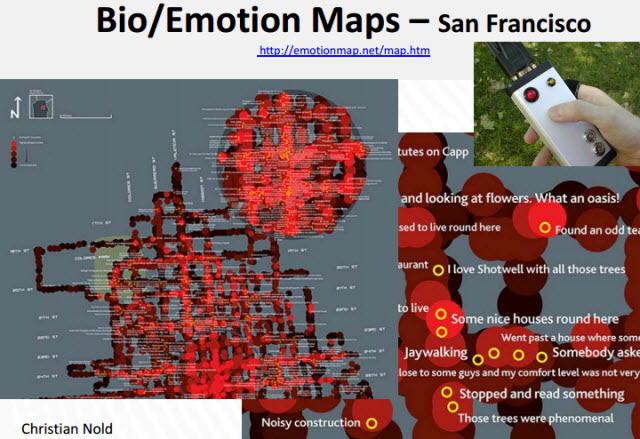 Marina Zdobnova was up next and she gave an updated talk on more than a year of insight gained from using Inside Tracker which is a blood analysis service that provides a way to visualize the data, address deficiencies and dietary recommendations. I personally have been interested in trying out Inside Tracker or WellnessFX which is another similar service and this helped illustrate some of the great benefits of using such a service that offers so much more than the standard blood data you get from your doctor after getting a physical. Another project that Marina is involved in that she touched upon was the Ultimate Answer which aims to allow people to create their personal happiness formula. This touched similar areas to Jeff’s talk on positive psychology whereby you fill out a survey by providing data to help calculate what makes you happy. Then the system uses a formula to track the data and provides a happiness index. I’m all wired up and ready to make music

The last speaker of the night was Aaron Thomen who created a project called MindMIDI that uses an EEG to convert brain waves into music using an algorithm. The music can is also controlled in real-time by the person through biofeedback. Aaron offered to let anyone in the group test the system and of course I raised my hand to be the first guinea pig. The system used a mixing board in which you can specify from your choice of many different individual instruments mapped by categories across 3 different channels. You have the ability to then mix your music by choosing instruments and controlling its volume. After I got wired up it was time to find out whether my temporal lobes had any signs of being a virtuoso. I have to say that testing this myself was very impressive. Some folks asked how you could control the music and Aaron stated that it takes practice and that people who meditate seem to be able to master it quicker. Then he told me to cover my eyes and sure enough the tempo went down and the music softened. I then opened my eyes and it regained the original speed. It clearly showed how visual stimulation affected my brainwaves and thus the music. It really was pretty cool. Below is a video demo done by Aaron.

So that’s the recap of what was an incredibly awesome quantified self meetup we had here in Los Angeles. I highly recommend that you try to attend a meetup in your city. There are plenty of them available all over the world!

Thanks for the wonderful recap Mark! If you want to follow Mark’s adventures in lifestreaming, lifelogging, and Quantified Self be sure to check out his wonderful Lifestreamblog!

This guest post comes to us from QS Los Angeles member, Mark Krynsky. I went to the Los Angeles Quantified Self Meetup meeting on March 7th and had a fantastic time meeting like-minded people that are all willing to experiment and share their experiences. The meetup was held at the artisanal engineering studios of the...