At this week’s Bay Area QS Show&Tell we had a packed house at the Institute for the Future in Palo Alto. The recap below is powered by Mark Carranza’s incredible memory experiment, described in the last post. I’ve used Mark’s work to refresh my own memory so that I could describe what happened last week more accurately.

Attila Csordas talked about posting his 23andMe data, one SNP at a time on twitter. Attila said this was a “failed experiment” due to the limitations of the twitter service; for instance, twitter doesn’t like to see lots of similar posts, and tends to interpret them as spam. But the idea of treating the genome as a person information stream, along with the notion of SMS as a common transfer protocol for data normally considered sensitive and private, were just a couple of interesting points from the discussion that followed. Another great comment: instead of making the human the account holder, what about making the SNP the account, allowing each SNP to have its own followers.

Gopal Sarma talked about the limits of memory, using anecdotes of Renaissance masters who used techniques of visual association.  Wikipedia has a good article on “the art of memory,” that describes these techniques. An accessible popular account can also be found in The Art of Memory, by Frances A. Yates. The image to the right of a fortified city on a hill is taken from the literature on the art of memory.  You can learn more here.

Sri Srinivasan showed us his self-tracking web site, Facet of Life. With Facet of Life, you can schedule regular alerts and reminders via SMS, email, and the web. When you reply to the message with a word or a number, it is entered into a database, and Sri is building tools to aid understanding. Sri, who suffers from chronic pain, talked about some of the knowledge he had already gained from using the tool; for instance, visiting the gym reduces pain, even when the session is brief. He used to skip the gym if he wasn’t going to have time for a full workout, now he goes even if he only has a few minutes.

Can estimate suicide risk by counting words? Bill Jerrold talked about the quantitative analysis of natural
language. After a general introduction to the notion of forensic
linguistics by way of Don Foster’s
work, he reviewed some recent findings that psychiatric conditions can
be identified based on subtle linguistic abnormalities, and that this
process can be automated using speech recognition software. His talk
raised the interesting prospect of quantitative self-monitoring via
recordings of everyday speech and writing. (Here are two interesting
papers Bill mentioned: “Word Use in the Poetry of Suicidal and Nonsuicidal Poets” and “Language use of depressed and depression-vulnerable college students.”)

Esther Dyson described her own use of the 23andMe personal genotyping service. Giving us a quick tour of her own genome, she mentioned that she especially appreciates looking at the graphs that compare the genotype of various members of her family. She said the immediate practical benefit of the personal genome was – for the moment at least – very slight and that people who are using the service at this point are
playing a role as benefactors, contributing to a critical mass of data
that can lead to new discoveries.

Joe Betts-Lacroix revisited “Joe’s Dream,” his vision an easy method of entering and retrieving personal data. Since he gave this talk, barely a year ago, several features of this dream have been realized. So he proposed another step that he called “personal instantaneous feedback.” (The video above is Joe”s original talk last year, at QS Show&Tell #2.) 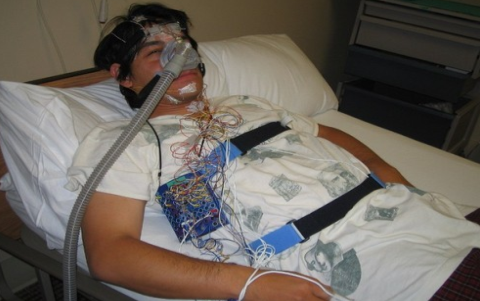 Bo Adler works at Fujitsu labs, where his work involves collecting and processing medical sensor data. Bo is also a walking experiment. He showed us how he does constant monitoring of his heart rate, blood oxygenation level, and blood pressure, using wearable sensors, and then showed us the results of one of his self-experiments. He suffers from sleep apnea, and uses a variety of methods to combat it. By graphing his biometrics during sleep, he learned – among other things – that while taking Nyquil made him feel that he was sleeping better, his data told a different story.

Mark Carranza gave us a quick recap of his MX “memory experiment,” which he described more fully at QS Show&Tell #3.

Finally, Steve Brown gave a too-quick talk about “augmenting your brain,” and about 3banana, a system he’s created for enhancing working memory. We were out of time, so he is going to come back again. If you can’t wait, however, the slides are here.