The false god of coffee

This year I decided to stop drinking coffee, my only source of caffeine.  Anyone who knows me will recognize this as a radical step. I’ve been drinking coffee since age 10, and I’d developed quite an obsession for the perfect cup.

In the past, I’ve experimented with quitting a few times by simply going cold turkey. Each time, the physical withdrawal, basically headaches, was over within 10 days, but after a month or two I would become convinced that coffee was good for my concentration and start drinking it again. 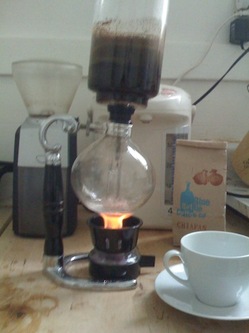 My reason to quit this time was the growing suspicion that coffee was causing mood swings and crashes that are bad for my overall sense of well-being. For this experiment I decided to stop very gradually. I thought that if I allowed the psychological withdrawal to occur gradually alongside the physiological, I would be able to observe my ‘coffee-desire’ without acting on it, and learn the skill I would need to avoid relapsing in future.

I made the same amount of coffee each day, using a vac-pot. Although I didn’t measure caffeine content, I did control many factors including grind, age of beans, water temperature and water/coffee contact time. From this controlled pot of coffee, I used measuring cups to discard an additional 20ml per week. I used notebook software to keep some records of my progress and I started with a 3 cup pot in mid-April ’09. Towards the end of July I wrote “I am increasingly wanting to abandon this project altogether”, but I continued and on 8th August I was down to a half shot glass per day, and decided I was done.

Over the past few days (starting around 12th Oct), I noticed myself increasingly thinking “I am having trouble concentrating and coffee might help”. These thoughts came to a crescendo on Wednesday. This time, I was armed with data.

As part of a separate experiment, I have been keeping track of the amount of time I spend working on projects.  I work in 25 minute intervals which I time with a coffee timer, and I mark an X in a paper journal for each interval that I successfully complete.  If I get distracted, I don’t mark the X, and if I can’t concentrate, I abandon it and don’t mark an X rather than sitting out the timer. I’ve been doing this since the end of June, so I tabulated the data and created a graph* of my hours of concentration per day, and overlaid a bar showing when I drank my last coffee. 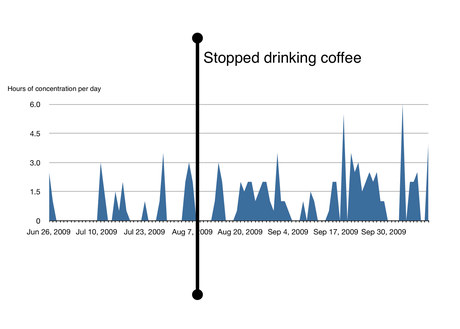 Causality is a complex issue. Obviously this is an n=1 experiment and I am intentionally doing other things that may well be improving my concentration, but one thing is very clear; the amount of time I spend concentrating has not deteriorated since I quit coffee, so I can easily reject the hypothesis “I need coffee to help me concentrate.”

I see this as a success for self-quantification.  Whether or not it provides a general insight into the effects of caffeine, it validates the utility of self-tracking for making individualized personal decisions.

I will be doing more experiments.

*At the QS MeetUp someone correctly pointed out that I had an error in the labeling of my x-axis on the chart I showed there.  This meant that I’d placed the “quitting bar” in the wrong place – near to september 4th, happily this doesn’t affect the conclusion, and the graph shown here is the corrected version.