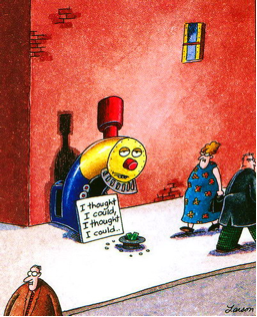 My curiosity about real world applications of objective techniques of self-discovery and self-management let me recently to some classic work by [Albert Bandura](http://en.wikipedia.org/wiki/Albert_Bandura), who introduced the idea of [self-efficacy](http://www.des.emory.edu/mfp/self-efficacy.html) into cognitive psychology. Self-efficacy is different than self-confidence or self-esteem. It is not a personality trait, or a set of general beliefs about oneself. Rather, it is a subjective expectation of how likely you are to succeed at some specified goal. You can have high self-efficacy in one area, and low self-efficacy in another. Although these expectations are subjective, they can be measured objectively by researchers, who ask a standard set of multiple choice questions. The design of these questionnaires is itself a [research area](http://userpage.fu-berlin.de/%7Ehealth/engscal.htm) of some interest, but the important thing is that, in the three decades since Bandura first introduced the concept, he and others have proven that it can be measured, that it can be influenced, and, most importantly, correlates with the actual probability of success in tasks that require motivation and persistence.
In outline, this seems obvious. If you don’t believe you can do something – quit smoking; learn a foreign language; overcome a phobia; etc. – you are less likely to persist in the face of discouragement. Any wise counselor could tell you to pace yourself, and tackle challenges in an ascending order of difficulty, so as not to burn out too soon or fall into despair.
What’s interesting about Bandura’s work, and those who followed him, was not the confirmation of penny wisdom, but the development of objective measures of self-efficacy that allowed experimentation. At what stage of behavioral change is self-efficacy most important? How can it be effectively influenced? Research on self-efficacy has influenced treatment for addiction, chronic pain, stress, depression, and obesity; it’s also played a role in athletic training and physical rehabilitation.
For the aspiring self-quantifier, the history of self-efficacy research is full of promising hints. Once the notion of self-efficacy has been separated from the more general concept of self-esteem, it’s easier to notice specific areas where low self-efficacy may interfere with learning or achievement. Low self-efficacy leads to avoidance behavior. We don’t try things we believe we can’t do. In Bandura’s original paper, he points to research showing that this avoidance behavior can persist even when there is no conscious anxiety, no negative emotional arousal. We simply skirt the issue. Perhaps we even convince ourselves that it is not necessary, or a waste of time. Engrained habits of avoidance can become nearly invisible to our conscious reflection, due to how effectively they guard us from the bad consequences we believe will result from failure.
The research results influenced by Bandura’s paper are applied mainly by teachers, coaches, and health care providers to boost self-efficacy in training situations. But it can also be a tool of self-investigation. We can hunt for deficits in self-efficacy that create unnecessarily limits using the following question:
“If I were good at it, I would definitely want to (do/learn) [X]”
It may well turn out that some of our deficits are not due to a lack of inherent capacity, but to a failure of persistence and motivation stemming from a lack of self-efficacy. Improve self-efficacy, and previously inaccessible achievements come within reach. This is an especially promising approach when the goal is simply average proficiency. Obviously, increases in self-efficacy cannot affect inherent limits. But in areas that one has avoided do to fear of failure, average can be a truly excellent result.
Noticing and correcting low-self efficacy can be difficult. The power of the concept is linked to its specificity. Self-efficacy is efficacy for something. It has an explicit goal. Complex tasks consists of lots of different parts, and of course they are situated within the context of our whole life. So self-efficacy can get lost in the noise of other phenomenon – general self-esteem, physical tiredness, environmental stresses and distractors. That’s why instruments for measuring and tracking self-efficacy are crucial for regulating it. In a future post, I’ll do a quick pass on some of the technical possibilities for tracking self-efficacy. But for now, here’s the original Bandura paper (PDF), which boasts more than 5500 citations, according to [Google Scholar](http://scholar.google.com/scholar?q=Self+Efficacy&hl=en&lr=&btnG=Search).
Excerpts:
> An outcome expectancy is defined as a person’s estimate that a given behavior will lead to certain outcomes. An efficacy expectation is the conviction that one can successfully execute the behavior required to produce the outcomes. Outcome and efficacy expectations are differentiated, because individuals can believe that a particular course of action will produce certain outcomes, but if they entertain serious doubts about whether they can perform the necessary activities such information does not influence their behavior.
>
> …
>
> The principal assumption that defensive behavior is controlled by anxiety arousal is also disputed by several lines of evidence. Autonomic arousal, which constitutes the principal index of anxiety,-is not necessary for defensive learning. Because autonomic reactions take much longer to activate than do avoidance responses, the latter cannot be caused by the former. Studies in which autonomic and avoidance responses are measured concurrently indicate that these two modes of activity may be partially correlated in the acquisition phase but are not causally related (Black, 1965). Avoidance behavior, for example, can persist long after autonomic reactions to threats have been extinguished. Surgical removal of autonomic feedback capability in animals has little effect on the acquisition of avoidance responses (Rescorla & Solomon, 1967). Maintenance of avoidance behavior is even less dependent on autonomic feedback. Once defensive behavior has been learned, depriving animals of autonomic feed back does not hasten the rate at which such activities are extinguished.
>
> …
>
> The theory presented here posits a central processor of efficacy information. That is, people process, weigh, and integrate diverse sources of information concerning their capability, and they regulate their choice behavior and effort expenditure accordingly.
>
> …
>
> It will be recalled that efficacy expectations are presumed to influence level of performance by enhancing intensity and persistence of effort.

My curiosity about real world applications of objective techniques of self-discovery and self-management let me recently to some classic work by [Albert Bandura](http://en.wikipedia.org/wiki/Albert_Bandura), who introduced the idea of [self-efficacy](http://www.des.emory.edu/mfp/self-efficacy.html) into cognitive psychology. Self-efficacy is different than self-confidence or self-esteem. It is not a personality trait, or a set of general beliefs about oneself. Rather, it...