It was a standing-room-only, energized gathering at Microsoft on Wednesday evening. Over 140 people came out to listen, connect, and discuss lifelogging at our biggest QS Show&Tell meetup to date!
The evening started with a lively social hour and workshop fair. Healthy snacks and wine were sponsored by Google Health. Some people brought projects to show. Feedback on this part of the evening suggested having more ways to connect with like-minded people, so we’ll try to have some kind of whiteboard next time where people can self-organize groups around specific interests.
At 7:30, everyone took their seats. Kevin Kelly welcomed everyone and ran through the 2-word lightning intros, Gary Wolf announced a discount on the Withings scale for QS members (let me know if you didn’t get the code!), and Ron Gutman from HealthTap announced a new project on tracking happiness.
Then the talks began.
First up was Gordon Bell, legendary lifelogger at Microsoft and author of Total Recall. Gordon gave a candid, engaging talk on his MyLifeBits project. He showed pictures from his SenseCam that takes a picture every 20 seconds while he’s wearing it. He generates 1 GB of data per month, including a screenshot of every website he visits and the hundreds of pages of health records from his multiple bypass surgeries. Gordon considers his data to be a surrogate memory – he doesn’t look at it unless he needs to remember something specific, and he enjoys making films from the pictures. Resources that he mentioned using include an Oregon Scientific pedometer and the Canyon Ranch preventive health resort in Lenox, Massachusetts.
A bit of controversy emerged when Gordon speculated that if he had been wearing his heart monitor strap while bicycling, he could have prevented his last heart attack – a cardiologist in the audience disagreed, arguing that heart rate does not predict heart attack. We heard quite a bit more from the cardiologist later on.
Randal Koene took the stage next. He showed his “dil2al” (detailed item lists to activity lists) Linux project that he created. Randal gets a prompt every 20 minutes that asks him to log his activities and recommends possible task changes according to priorities that he sets. He finds the system helps him to be more productive and not get bored. He’s been using it since 1999, and he sees it as both a memory assist and a structure that works for him so he can relax and get his work done.
Seth Roberts then presented new findings on his “Arithmetic and Butter” experiment. Seth has a set of arithmetic problems that he solves every morning to measure his brain function. He found that eating half a stick of butter every day shaved 30 milliseconds off his time to solve the problems. He concluded that butter improves brain function, and suggested that we tend to underestimate the probability of something good happening when we experiment.
Enter the cardiologist again. Half a stick of butter a day?!? A heated debate broke out, with the cardiologist citing research linking fat intake to heart disease, and Seth firing back that 50 years of epidemiological research are not as clear as his experiment. Greg Biggers offered to start up a trial on the spot, recruiting volunteers to try Seth’s arithmetic and butter experiment. Stay tuned for the results of that at future meetups! 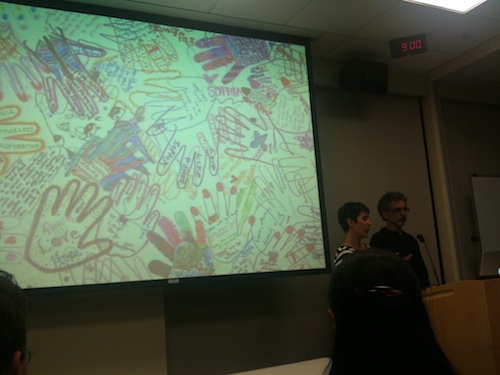 Karen Herzog and Richard Sachs closed the night by telling the incredible, moving story of their late daughter Sophia. When Sophia was 10 months old, she was diagnosed with Niemann-Pick Disease, a rare lysosomal storage disease that affects only 8-10 children in the world at any one time. Dedicated to their daughter, and frustrated by the medical and research systems available to them, Karen and Richard bravely built their own model of integrative care. They opened their home to a wide community, kept detailed collaborative records of Sophia in a Binder of Purpose, and even started their own n=1 clinical trial of at their house. The act of documentation enhanced meaning for Sophia’s caregivers because her life depended on documenting everything – one small thing that went wrong could mean that she would die.
Sophia defied all odds and lived to an amazing 4 1/4 years, inspiring people around the world with an award-winning prayer flag art project and with her quiet connection. Her story is a powerful reminder of the meaning of life, health, love, dedication, community, and even tracking. Karen and Richard’s courage to share Sophia’s story was rewarded by touching the hearts of all of us in the room.
The evening ended with another hour of free-flowing discussion. A thousand thanks to Bo Adler, who came early to help set up and stayed late to clean up, and to my daughter Samantha, who wrote out all 182 name tags by hand. 🙂 If anyone wants to volunteer to help at the next QS Show&Tell meetup, please let me know.
Also, we’d love to be able to keep putting on these fantastic events for all of you. If you or your company is interested in sponsoring Quantified Self, either by paying for the food and video recording of a meetup or by becoming an annual sponsor, please let us know.
Thanks everyone, see you in October!